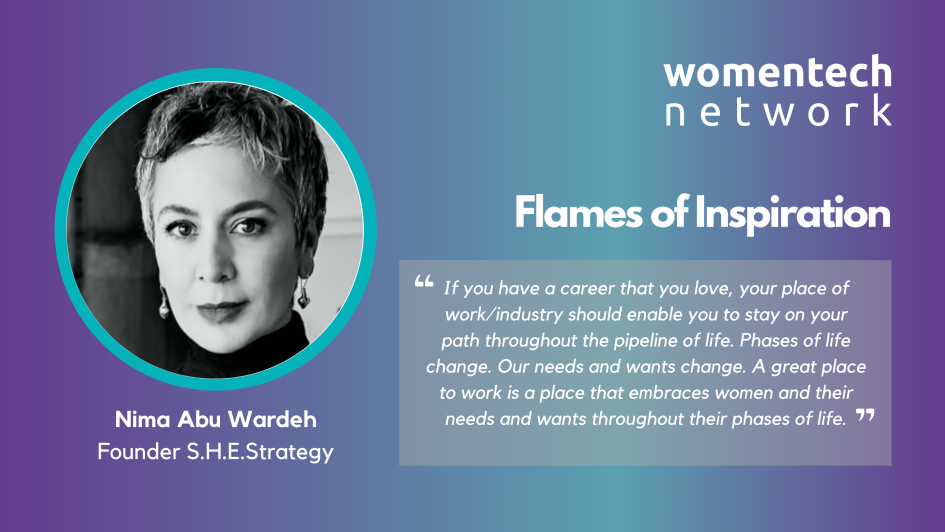 The WomenTech Network had the pleasure of hosting Nima as a speaker during the WomenTech Global Conference 2020. Due to popular demand by the network, we organized a fireside chat between WomenTech CEO & Founder, Anna Radulovski, and Nima.

The talk started with Nima telling us about her motivation to start S.H.E.Strategy in order to pass on skills, knowledge, and tools that will allow women to put their hand up, to step up, to speak up.

"One of the reasons I created S.H.E.Strategy was because I chaired a two-day event that was for women in this huge, multinational company that had spent two years buying up all the competition, and they wanted to get more women into middle-management and beyond. This company was one of the first signatories to the UN 'HeForShe,' for example. However, the majority of the women there were silent. That's why S.H.E. exists. Don't tell women to put their hand up, to step up, without passing on the skills and tools to know how to do this and how to do it well... My big wish is that we make our decisions based on real information, meaning, if I don't do this what will happen to me later in life?"

What is the real information, what is the problem that we need to be aware of when we make decisions in life? Nima shared some alarming statistics that not many talk about.

The statistic that women earn 80% of men's pay is well-known. However, not many know that this figure doesn't account for women who step out of the work force for some time, whether to be a care giver to a child, parent, spouse, or for another reason.

One study, over a 15-year period, did account for that. The results were quite different. That study included women who take time off, women who don't, women who didn't work at all. The more inclusive study revealed that women actually make 49% of what men make. The big reason for that is the majority of women end up taking some sort of a break from their career, and that affects the trajectory of their life. It affects it to the point that women are 80% more likely than men to be poor at the age of 65.

Let's say a woman doesn't take a break and is a high earner. Will the numbers be better then? Nima revealed to us that even then there is a gender pay gap. If a woman at age 25 earned $110,000 alongside a male counterpart with similar trajectories and career progress, by the end of her career that woman would have earned $800,000 less. The reason here is that the incremental gains over time for the woman would be slightly less, but when you look at it in retrospect they turn out to be quite substantial.

"Data is useful when we do something with or about it [...] Very few people know what happens with the trajectory of money and life, and how seemingly innocent decisions made, can change it. Not going for a high-powered job, not going for a promotion, not going for a salary increase, taking time off work because you're having your third child or your parent is ill; these things are part of every-day life for the majority. I don't blame the women. It's a cultural thing that needs to change. We are ignorant about certain things because how things are. For example, when you take a year off work as a female, you don't just lose the income from that year, you lose the equivalent of 3-4 years of your lifetime income because of the incremental increases you lose on. Who tells us this?"

Nima's mission is to equip women with that knowledge and strategies to full-proof women's future against downturns in life.

"In an ideal world, if you have a partner, you can fully trust that partner, and you have a wonderful life, and everything is perfect. Unfortunately, that's not the way it works out. Some people never have a partner or they get divorced, or somebody dies. Life happens. So from my perspective it's about saying 'I want to have a 'dignity fund'. Meaning: if something goes terribly wrong, if the workplace is terrible that you can't take it, if you're marriage is falling apart, your parent gets ill, whatever the reason is, you have choice and dignity."

To build your dignity fund, you need to establish your most likely trajectory, and then secure for any pivots caused by problems in life. To do that, you need to live beneath your means, so that you have money in your life for tough times. That's just one part of it. Another is to lean into your earning potential.

"How do I start thinking about my earning potential and what I'm doing now to lean into it? It's a simple concept, but challenging, because you have to be really comfortable with showcasing your brilliance, going for opportunity, negotiating for your sustainability. Other people call it confidence, I call it being comfortable in your own skin and with how you are."

To achieve all this, it's vital you learn to define the important aspects of your life.

Define success. What is success to you? Is it a corner office, or is it a peaceful life in the country; is it community or independence; maybe it's something else.

Define balance, but remember you cannot do it all all day, every day. It's about averaging out the important parts of your life, whether it's work, family, friends, passions. Sometimes you might feel like a bad mother because you took a work trip, but that trip can help your career. Compensate to your children in the next days. Embrace true balance and forego the idea you can do it all at once. If you're writing a book for example, you'll probably spend more time on it and less on other aspects of your life for a period of time. That is okay.

Incorporate a few non-negotiables in your life. One is to be physical every day, as in actually do a physical activity on a daily basis.

Tip: observe the retention rate for women at companies you apply for.

We hope this overview of the fireside chat with Nima Abu Wardeh ignited the desire in you to define your success. For more flames of inspiration, join our network as a Premium Member to get access to our complete video library, networking opportunities, and exclusive events.