"Meet The Team Which Powers the New Era of Smart Everything"

Session: Meet The Team Which Powers the New Era of Smart Everything

Every day I wake up and get the opportunity to make a difference through my work; but today is special because I get to share my day at Synopsys with you, so that you too are empowered to bring ideas to life through a rewarding career.
At Synopsys, we’re enthusiastic learners and seasoned inventors. We’re makers and visionaries who make technology safer. We’re innovators who develop the software and hardware that drive the world's high-performing chips for amazing things like autonomous vehicles, smart homes, and machines that learn.
We embrace diversity as a company, so we can create solutions that serve not just technology but the humans behind it. We do it all while committing to integrity, execution excellence, leadership, and passion. Because doing so can spark the very innovation we are pursuing!

Fabienne Desbouvries is a Senior Staff Product Solutions Sales Manager at Synopsys. She has over 30 years of experience in Electronics Design Automation in various roles including applications engineering, marketing, business development and sales. She enjoys the quick pace of innovation in the chip design and semiconductor industries. Fabienne is known for her collaborative leadership and ability to build trusted relationship. As a senior members of the Sales Team, she enjoys sharing her experience with new hires and mentoring them to be successful in their job. Her leadership position is the result of her passion for work and customer success.

Andreea Lazar is a Staff Research and Development Engineer in the Custom Design and Manufacturing Group at Synopsys, committed to helping build performance and quality into the DNA of software. Working for 10+ years in the EDA field, she had the opportunity to see up close how new software designs meet legacy code. Andreea has a master’s degree in Embedded Systems from Eindhoven University of Technology, The Netherlands. She joined Synopsys directly after graduating. She enjoys working on challenging projects, understanding, and improving complex algorithms. Andreea is involved in different inclusion and diversity initiatives in her organization, but she is also a WomenTech mentor hoping she can encourage and inspire more women to join the high tech filed and be part of the innovation, creating a more balanced future for our kids.

Christina Pechlivanidou is a Senior ASIC Digital Design Engineer for PHY SERDES team, in Synopsys Porto where she has been working for almost 6 years.
Originally from Greece, she graduated from the International Hellenic University in 2016 with a Bachelor’s degree in Computer Science and Engineering. During her last year of studies, she also participated in the Erasmus+ program at Lublin University of Technology in Poland. Worked during 6 months in Warsaw for a Software house and in 2016 she moved to Porto to start building her career.
Christina started at Synopsys as an Intern for the IP Prototyping team where she worked on Automation scripting and tools. Prior to her role as a Verification Engineer for PHY SERDES team, she was working on Automation and the QA of customer releases for roughly 2 years. The past 4 years, she has been working as a Verification Engineer for the PHY SERDES team. She is an accomplished female engineer leading MPHY VMM Verification of C10 projects.
Christina is known for her organization skills and for her objectivity and clearness during her communications reducing misunderstandings and possible wasted efforts. She is always available to guide her peers and to contribute to a healthy environment in the team, bringing interesting topics and activities to the table.
Christina has also participated in a couple of projects that target women's empowerment, such as Girls Go Engineering, where basically she was part of a panel of female employees from Synopsys that would grand a scholarship to a female Engineering student. During the last year and a half, she is a Mentor for female students in Womentech program.

Mara Carvalho is currently working as a Manager of a Digital Design team for Mixed-signal IP in Synopsys Porto, Portugal, where she leads a team of 6 people.
Mara was born in Marinha Grande, a small town in the center of Portugal. From early age she found her passion for Engineering, moving to Porto in 2002 to start her degree. In 2007 she finished a Licenciatura of Electronics and Computer Engineering in the Faculty of Engineering of Porto University. In 2008, Mara has finished her Master’s degree in the same faculty, where she has developed a work entitled “Interactive Game for the Training of Portuguese Vowels”, focused on real-time digital processing of voice signals.
Mara Carvalho has joined MIPS ABG in 2008. In 2009 the group was acquired by Synopsys, where she has worked ever since. During this time, Mara has contributed to the development of the digital portion of several PHYs, namely for applications like D-PHY and M-PHY (with active contribution within the MIPI Alliance Group), PCIe, USB, HDMI, DPAlt. Around 2017 Mara moved to a management position within Synopsys, where she thrives from the possibility of enabling people’s development and contributing actively to a successful interaction between multiple teams from multiple countries and backgrounds.

Arnold Okiyo is a product release and quality team lead within the Silicon Realization Group at Synopsys in Bristol, UK.
He has over 20 years of experience in digital design, physical implementation, flow automation and methodology.
Arnold currently works in the HAT (Hardware, Analytics and Test) BU providing CAD/Methodology support for sensors and monitors IP products.
Prior to his current role at Synopsys, he has worked in various EDA (electronic design automation) roles including 3rd party IP procurement, digital verification and product design environment.
Outside of work, Arnold is a staunch supporter of Arsenal football club and enjoys food, travel, reading, music, movies, sports, hiking, fitness and well-being.
Arnold is passionate about equality and equity (there is a difference!) inclusion and diversity. Towards this end, he is proactively involved in raising awareness and participating in I&D initiatives.
He is currently the I&D Europe Champion for Synopsys SRG (Silicon realization group) and Membership Lead for VIBE, which stands for Very Inclusive Black Employee, an I&D employee resource group at Synopsys.
Arnold is also a Mentor at Women in Tech and a member of the I&D Steering Committee at Synopsys. 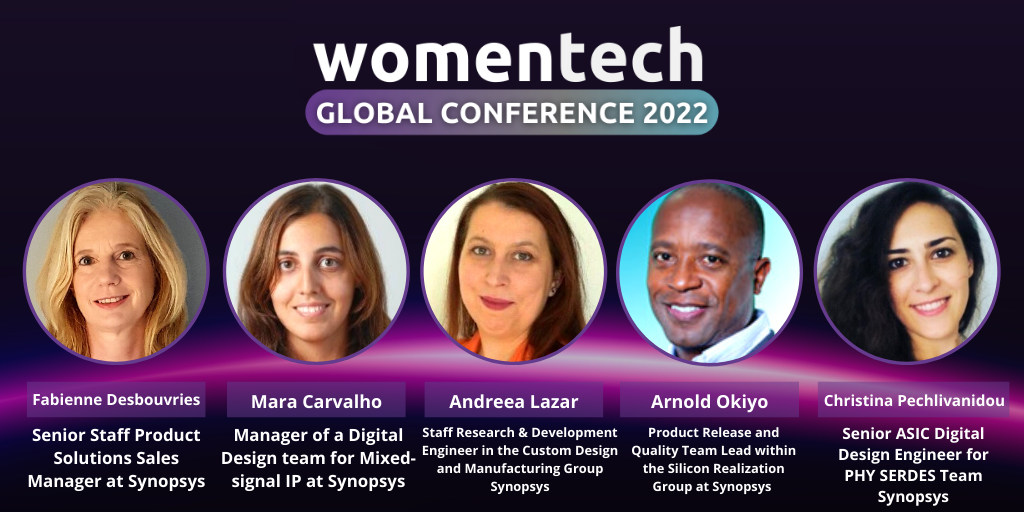