Founder and President at Workshop4Me a.s.b.l. 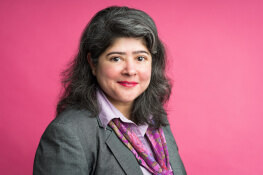 "Coding to impart the 4Cs of education - 21st Century skills"

The 21st Century skills that students must learn to be future-ready are the 4 Cs’ – creativity, critical thinking, collaboration, and communication. Integrating these within every subject ensures that students exercise these skills, making them better prepared for the real-world.
CODING is a great way to bring these into all subjects.

Madhumalti, is a lead innovator by thought and process introducing coding for kids over the weekend and made it astoundingly popular. She has more than 25 years of experience in technology of which 11 years were with IBM. She formally founded Workshop4Me a.s.b.l. a non-profit organization in Luxembourg eight years ago, to create the problem solvers of the future and move children from being “consumers” to “creators” using technology. She has been an advocate of Diversity and is recognized as an extraordinary ex-pat in Luxembourg. She has been a speaker at several events including TEDx India, European Women in Technology, Campus Party Italia. She is passionate about bringing girls and women into technology. Their International Women's Day event in 2015 was featured by CNN International as the top 10 IWD events from around the world you would be crazy to miss.
Madhumalti is EU Code Week Ambassador for Luxembourg, a mentor with the STEM Scholars program with the New York Academy of Sciences and mentors girls for the worldwide mobile app development contest Technovation Challenge since 2017. She is EU Robotics National Coordinator since 2019. She is on the Executive Board of EASE – European Association of STEAM Educators. Her efforts were instrumental in bringing coding into the curriculum of primary schools in Luxembourg.
While working in IBM India for 11 years, she has been chairing initiatives like Women and Technology (K-12), Core Team member of EXITE (Exploring Interest in Technology and Engineering) for school girls, facilitated Taking the Stage program for Women professionals in IBM and led other such initiatives. She is author of a children’s book ‘Let’s Code Python – A Beginner’s guide with a hint of Data Science’. Her recent event for EU Codeweek and EU Robotics week on AI for Kids has been popular for both teachers and students.