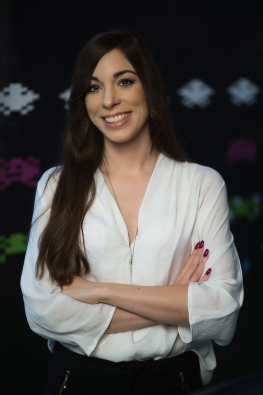 "Diversity and gender inclusion in the Games Industry. This is not a game!"

Session: Diversity and gender inclusion in the Games Industry. This is not a game!

Diversity is a not only a ethical issue, but also an economic one. Over 10 years ago, according to the International Game Developers Association, only 11.5% of game developers identified as female. The number of women involved in all areas of the games industry has been creeping upwards, but, despite these encouraging statistics, women and people of color are particularly underrepresented in senior roles.
But diversity in gaming isn’t about ‘political correctness’ or ‘pushing the gay agenda’, but more about people wanting to see themselves in video games. Games can help us approach modern issues such as ageism, transphobia, sexism, racism and mental health, and foster empathy.

Founder, Women in Games Italia, Vice Director, VIGAMUS Foundation | Event Director, Gamerome.
After working as Content Manager and Head of Research at VIGAMUS Foundation, She was employed by Microsoft as Xbox.com International Coordinator on the Integrated Marketing Europe Team at the European Central Office located in Reading, England.
Currently employed as Vice Director at VIGAMUS Foundation, She is in charge of planning new business strategies and International Partnerships.
She is the Event Director of Gamerome, the Developers Conference based in the Capital of Italy and the Italian Lead of Women in Games, the not for profit Organisation for women in video, mobile, online games and eSports, being also a member of Womentech – Women & Technologies.
Expert in communication, digital marketing, new media and interactive storytelling, and author of Game Studies, She is teaching assistant in Theory and Criticism of Multimedia Interactive Works at the University of Rome “Tor Vergata” and Professor of "Diversity and Inclusion Policies in the Games Industry" at Link Campus University.