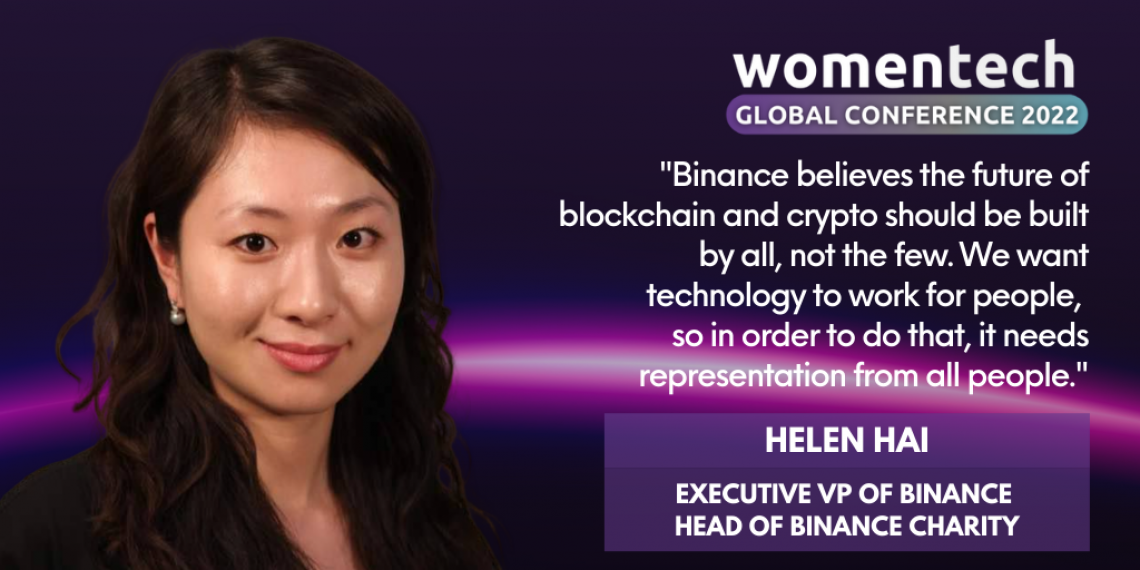 Helen first became interested in using blockchain for good due to her extensive experience working across Africa, which led to her becoming the United Nations Industrial Development Organization (UNIDO) Goodwill Ambassador for industrialization in Africa. Helen is also a co-chair of the Global Future Council on the Future of Consumption for the World Economics Forum.

Especially for the WomenTech Network, Helen agreed to give an interview and share her story.

Join the Women in Tech Global Conference 2022 to hear Helen's talk "Technology and Humanity in Times of War", and other inspiring sessions.

Are you excited to be among the speakers at the Women in Tech Global Conference 2022 and what motivated you to join our community of 100 000 women in tech, minorities, and allies?

It’s a great honor to be part of the Women in Tech Global Conference. I believe this community is hugely important in engaging and empowering to ensure we see the future of technology, specifically blockchain, as it should be…diverse and inclusive.

The global blockchain market is set to grow exponentially in just a matter of a few years. Yet it remains a male-dominated sector. We’re proud of our fully female team at Binance Charity but that’s not reflective of the status quo. Of the 378 venture-backed crypto and blockchain companies founded globally between 2012 and 2018, only one had an all-female founding team, and only 31 (8.2%) had a combination of male and female founders - Binance being one of these organizations. Outside of leadership, the stats remain just as dire with 95% of people in the blockchain industry is men according to the Global Crypto User Index.

We can change this and not just the gender imbalance, but diversity as a whole: socio-economic backgrounds, race, cultures, disabilities, and so on. Binance believes the future of crypto should be built by all, not the few. We want technology to work for people, so in order to do that, it needs representation from all people. Through our projects and partnerships, Binance Charity is working to ensure quality blockchain education, innovation, and research opportunities are within everyone’s reach.

Share with us about your background, your journey in tech, and what inspired you to develop your career in this direction?

I was part of the generation which witnessed over 850 million people lifted out of poverty in China. I  directly benefited from Asia’s economic boom by securing myself a place at a good university and becoming a chief actuary in a top Chinese company before I had reached my 30th birthday. Yet I still felt something was missing, I was missing my purpose.

I decided to pursue Tsinghua-INSEAD EMBA, a collaboration between INSEAD and Tsinghua University School of Economics and Management in Beijing. This Executive MBA program, ranked in the top 10 globally by the Financial Times, completely changed the course of my career and life. Following my EMBA I quit finance and uprooted my life to Africa.

Here, I worked with African governments to boost industry and create jobs, which led me to be named a 2015 Young Global Leader by the World Economic Forum. I  went on to be named among Bloomberg’s 50 people who shaped 2018 in an unexpected way and today, I serve as the United Nations Industrial Development Organization (UNIDO) Goodwill Ambassador for industrialization in Africa.

When Binance, the leading cryptocurrency exchange, set up its Blockchain Charity Foundation in 2018, I jumped at the chance to lead it. Heading up at Binance Charity allowed me to have an even greater impact within the borders of Africa but also globally. My mandate is to use blockchain for good and work to support the UN’s Sustainable Development Goals, on issues such as reducing poverty, achieving financial inclusion, eradicating inequality and protecting people and our planet.

Within our first year, we raised more than $3.2 million in crypto and helped feed over 5,000 children as well as delivered aid to over 1,000 disaster victims.

Today, we have donated more than $20 million USD equivalent to 27 projects across 41 countries. This is tremendous progress in just four years but it's just the tip of the iceberg in terms of the potential blockchain can have in driving positive social change. I’m excited for the future of blockchain and cryptocurrency in this space and we’re doubling down on education, innovation, and research to ensure we can have the greatest impact in changing the lives of billions of people for the better.

Who would you advise to attend the Women in Tech Global Conference and why?

I would of course advise any women interested or already pursuing a career in technology to attend, as well as anyone who feels they are facing an uphill battle in terms of entering into this industry. This is a fascinating time for technology, especially with all the developments surrounding Web 3.0. It’s a pivotal and progressive time for blockchain, particularly around shaping its real-life use cases and solidifying it as a tool for driving impact for the masses, not just the wealthiest among us.

However, I’d also advise men to attend this conference, not only because of the depth and breadth of topics covered but also because they play an important role in creating a more diverse, inclusive future. It’s important to understand the trials and tribulations women face in such an industry to build deeper knowledge and understanding of how we can all take steps to change this for the better.

🎤 In her #WTGC2022 session "Technology and Humanity in Times of War", Helen Hai will discuss the role of cryptocurrency and blockchain in times of adversity and how we can better use technology to serve humanity.