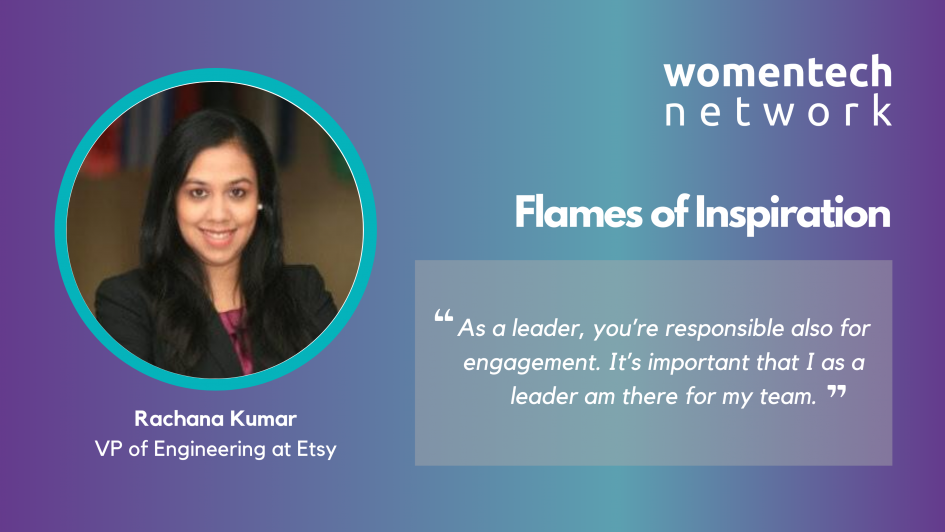 Rachana Kumar is an award-winning and accomplished woman in tech, speaker, mom, and a true inspiration for many women in tech.

We started the Fireside Chat with her talking about the genesis of her interest in technology.

You can follow the time links to watch different moments from the chat.

Rachana’s interest in tech started in high school. She was really good at math and science, and tech was booming back then in India. Rachana decided to pursue engineering. Her interest in technology really peaked once she started working.

“I started in tech consulting and applied technology to real-world problems.“

When Rachana went to engineering school, there weren’t that many women studying tech, but she observes way more women entering tech nowadays.

Bangalore had a lot of tech opportunities when Rachana finished school, but she had a lot of family, including her sister, in the US. She suggested that Rachana go there, and Rachana started looking for jobs in the country.

“There were a lot more different fields and opportunities as well, which also contributed to my decision.“

Immigration was different and with the high number of tech jobs Rachana’s choice was solidified.

“There are different paths to come to the US. The most common path that people choose is they come for a master’s and once they do that, they find a job afterward. Grad school gives you a good learning opportunity to learn not only tech skills but also life skills and get ready for the real world and life in the US.“

Rachana went to Columbia University in the US. One of the things she wanted to do with that was to use technology in the non-profit sector or at an international organization.

“That’s the great thing about grad schools, it opens up opportunities you might have not even heard of before.“

A friend of Rachana opened her up to Etsy. For Rachana, it’s important to do something with a purpose. At Etsy, she liked that at any given point in time they help entrepreneurs and many of them are women.

“The ability to take women’s talents and making skills and turning them into a business and providing them with a global client base is very exciting."

Rachana considers job interviews as a two-way process. She says hiring managers are looking for people who ask hard questions and think critically.

“Look at the core of the business and the customers the company is trying to serve, are these things that excite you in a job? Once you have clarity on that, a few questions you can ask is how they do research, understand their customers, do work on a day-to-day basis, what do they think about diversity, does the whole team look the same.“

When Rachana started there were less than a100 engineers; they have over 600 now. So every year there looks a little different.

“What I learned was to always be open to change. […] As long as things change for the better and the core value is the same, then I feel you have to adapt. […] When things are changing constantly you have to look at your processes, hiring practices, etc. Once you go public, you have to track your finances more closely, look at them on a monthly basis. As a startup, it's different because you grow fast organically.“

In Rachana’s family, they’re two working parents. She said having had family around them in their personal space helped a lot so that she could focus on her career. She believes if she was alone, probably it would have been impossible. It’s like having three jobs: taking care of the home, of children, and your actual job.

“As a leader, you’re responsible also for engagement. It’s important that I as a leader am there for my team.“

On the professional side, Rachana feels very grateful to work for a company that is highly empathetic and very flexible. The leadership was very transparent in handling the COVID situation and encouraged all leaders to be.

“We were one of the first big offices to completely go remote. […] Our CEO would talk to the company often to try to figure things out collectively.“

The way Rachana sees things when it comes to the difference between male and female leaders is that based on who you are and your life experiences, people are very different and not only because of gender. All of that will add to who you are as a leader. Gender can definitely be a contributing factor.

“That’s why diversity is so important in a team, not only in terms of gender. Then you will have a difference of opinions, which can improve your customer experience at large. […] I think traditionally it's accepted that a leader has to be very stoic, but that shouldn’t be the only form of leadership. Women are more expressive and vulnerable. That kind of leadership is also important, where leaders can complement each other. […] Empathy can add a lot to leadership, especially in times of crisis.“

“I don’t see as many as I would like to. It feels it’s like two steps forward and one backward when it comes to diversity in technology. Etsy’s executive team has more women than men, it’s one of a few tech companies where there is gender equality. Yet, I am the only female VP of engineering. There’s still lots of work to do.“

Still, when Rachana entered tech, not many conversations revolved around gender diversity in tech and how to improve the situation.

“I think Etsy is a place where I enjoy my work and team. It was also a high-growth company that allows you to grow quickly.”

So Rachana attributes professional growth to finding purpose but also being at the right place at the right time.

She stressed on the importance of having support if you want to grow a family and a career. Having supportive parents, in-laws, siblings, and especially a supportive partner can greatly help you in achieving your goals.

She mentioned the value of having a strong support network at work too, people you can have as mentors, as well as people to talk to about your industry and big career moves.

“If you’re ambitious and want to grow, it’s good to be open to taking risks, especially if no one else will take it.”

You can sign up for future Fireside Chats here.