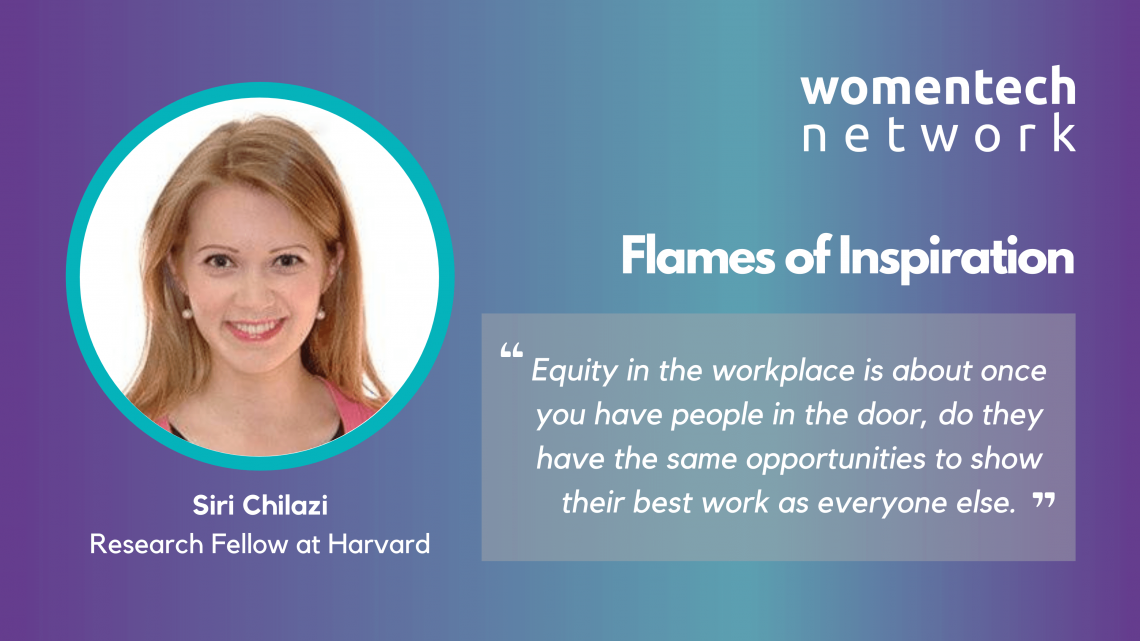 “I recently did a research study in advancing gender equality in venture capital, and as part of that study we interviewed a lot of venture capitalists here in the U.S., one-on-one,” Siri shared. “What shocked me was how little they knew about the state of gender equality in their own industry. That’s what showed me the importance of communicating that knowledge and raising people’s awareness.”

The WomenTech Network had the pleasure of hosting Siri as a speaker during the WomenTech Global Conference 2020. Due to popular demand by the network, we organized a Fireside Chat between WomenTech CEO & Founder, Anna Radulovski, and Siri to talk about her research and the knowledge we can all use that stemmed from it.

“During another study that I did a few years ago with a very large Fortune 50 tech firm, we were looking at the experiences of men and women at the most senior levels. Even the women who were up there right on par with the men in the executive suite had reported in surveys less satisfactory experiences than the men.”

The study showed the roots of inequality start way earlier than the senior positions. Women were more likely to come through the formal HR process. Men were more likely to already know someone in a company before they join it. This is important because on day one, when the new women and men employees first walked in the door, the men not only had a network inside the organization, but those people were giving them a lot of informal knowledge about how to best navigate their career.

There are also well-documented biases in things like performance evaluations. When women get feedback, it tends to be more about a subjective assessment of their personality. When men get feedback, it tends to be based more on an objective assessment of their competence and business performance. This again skews the playing field because getting feedback on what you need to improve is vital to advancing your career.

To create a level-playing field, it’s the system that has to change. This takes time though. That’s where building a network, by joining organizations like WomenTech for example, comes in. It’s a strategy to help women overcome the fact that the environment is not completely fair and objective today.

Can Quotas Fix the Problem?

“I make a distinction between quotas and targets. The main difference is that quotas are mandatory. They’re often used in countries as a law. In companies, we don’t really see quotas, but voluntary targets. In practice, there are no consequences if you, for example, don't have 50 percent women at entry-level positions.”

Goals and targets are actually some of the best ways to accomplish what companies set out to achieve. The research is overwhelmingly clear that when we set a goal, we’re more likely to follow through. If any company is serious about increasing its diversity hiring, Siri recommends setting a goal that’s challenging, yet realistic.

“It starts with running the current numbers and current data of how many people you have in the organization, what are your current hiring rates, where are you sourcing the applicants from, where are you getting most of your diverse applicants in the door. Then, companies should set a goal that’s stretching and challenging, but also logistically achievable.”

Organizations love hiring interviews and yet based on about 30-40 years of research, it turns out the typical interview is actually the least predictive of hiring. This means that your evaluation of another person after that interview has no correlation to how well the person will do their job.

“You might unconsciously compare the applicant to all the other people you already work with. Does this person look like all the people that have been successful before in the organization? If I look different, if I act differently, have a very different background, then I don’t quite fit the part.”

Siri offered a couple of solutions to this:

A work sample test is basically an exercise designed to mimic the actual job as closely as possible.

A structured interview is the most unbiased way to do one. Every candidate gets asked the same set of questions, in the same order, and there’s a standardized grading rubric. Each interviewer is supposed to grade candidates in the process of the interview because we tend to overrate the most recent experiences we encounter. Basically, the last impression is the lasting impression.

“A diversity inclusion specialist can help. They have the power and influence to do what they need to do. The problem here could be that if one person is focused on diversity hiring, then the other recruiters could think they don’t have to focus on that in the hiring process. The message we want to communicate is that it’s every person’s job to ensure the organization is inclusive."

For women to improve their chance of getting in a tech company, it’s important they remember the power of networking. Especially in really large companies that get thousands of resumes, getting hired is about standing out. Knowing someone in the organization can help women with at least bouncing off that pile of resumes.

“Be as well prepared as you can for the hiring process. A lot of companies in tech do have a form of coding interviews. There are a lot of resources online where you can, for example, do a practice coding interview; join networks of women in tech where you can get advice.”

Men Can Empower Women on a Daily Basis

“On a daily basis, the biggest thing is to be a mentor and a sponsor. Mentorship is about informal advice. Sponsorship is about a person who actually has the power to influence your career advancement using that power to give you opportunities.”

A sponsor is often someone more senior in the organization who is in the room when you’re not, when you’re being discussed. Your sponsor knows you and speaks up to say that you can take on a project, a promotion, or other tangible opportunities.

Both are very valuable, but sponsorship is the one that can help you get a promotion, go to a conference that advances your career, or get a high-visibility project to take your skills to the next level.

Venture Capital is One of the Least Diverse Industries

These numbers motivated Siri to focus her research on equality and inclusion in venture capital.

“If we can figure out insights that work to increase gender equality in VC, then we can do it everywhere. Venture capital has a huge role in shaping the society of tomorrow because by deciding which ideas get funded and which ideas get an opportunity to come to fruition, they’re literally shaping what our world will look like in 10-15 years from now.“

In that industry, the problems are quite similar. The people who run the VC ecosystem are not in tune with the diversity-related challenges present. There are funds focused on minorities, but they’re really small. Like with diversity hiring specialists in recruiting, minority VC funds could be dangerous because then other funds might feel they don’t need to change their process.

Research shows that investors ask women founders and male founders different questions. Male founders raised 5 times as much money as female founders on average, and the research traced that gap in funding back to the fact that male entrepreneurs were asked promotion-related questions, about the potential upside and future opportunities for their business. Whereas the female entrepreneurs were asked prevention-oriented questions all about threats and losses. Just like it is with interviews in recruiting, making VC interviews structured can reduce bias.

“Equity in the workplace is about once you have people in the door, do they have the same opportunities to show their best work as everyone else or are we doing something that impedes their full self in the situation.“

You can find our future Fireside Chats, as well as a recording of Siri’s talk here. Join our network to get access. The WomenTech Network gives you empowering networking and career opportunities through its community platforms and events.

If you’re a company looking to improve your diversity hiring, WomenTech Network can help. Join our job platform and get access to a 10,000+ talent database.